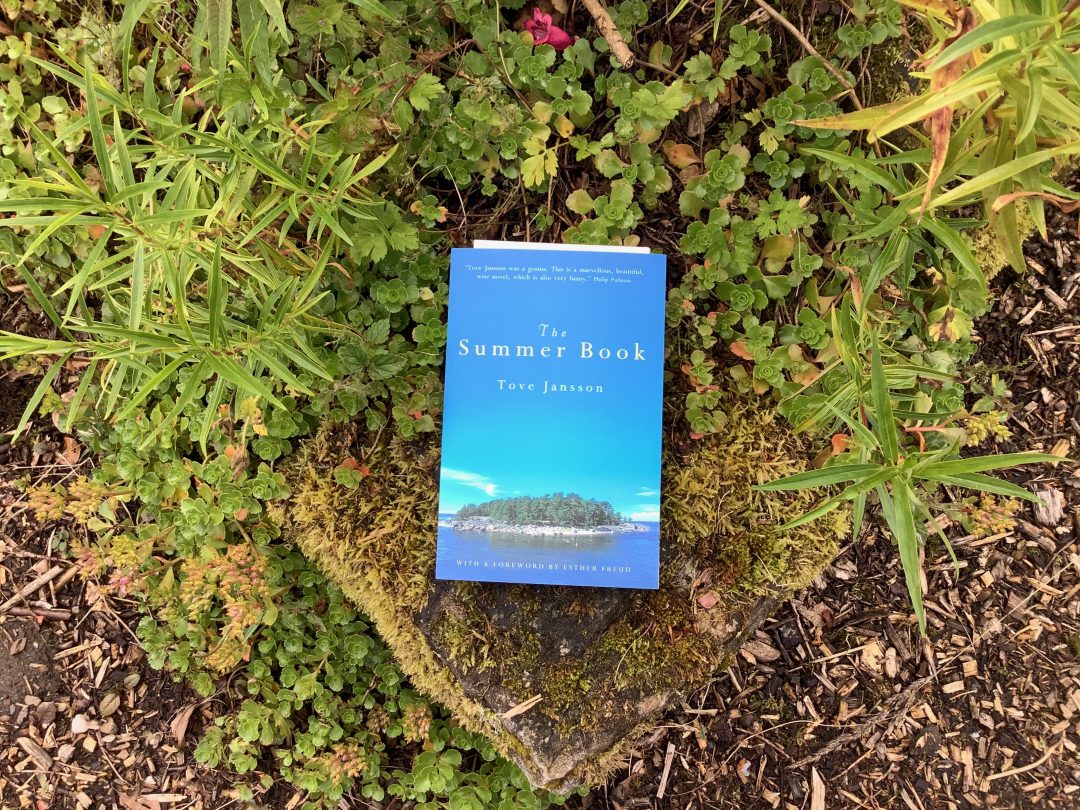 The Summer Book by Tove Jansson

We’ve now completed our first round of reading group discussions. We wanted to let you know which books we’ve been reading and give you a flavour of where our discussions have taken us. In this post I’ll discuss The Summer Book (1972) by Tove Jansson.

Tove Jansson (1914-2001) was a Finnish writer who is most well-known for creating The Moomins, a series of children’s books. The Summer Book is one of the novels she wrote for adults. It takes place during summer on a small island in the Gulf of Finland and centres on the relationship between six year old Sophia and her grandmother. While some of the short chapters contain mini-adventures, there is no over-arching plot, as such. As Scottish author Ali Smith puts it,

‘Jansson’s brilliance is to create a narrative that seems, at least, to have no forward motion, to exist in lit moments, gleaming dark moments, like lights on a string, each chapter its own beautifully constructed, random-seeming, complete story. Her writing is all magical deception, her sentences simple and loaded; the novel reads like looking through clear water and seeing, suddenly, the depth’.

What we can learn from Sophia and her grandmother

We suggested this book to our participants because of the centrality of the intergenerational relationship between Sophia and her grandmother. In discussing this, participants of different ages noted some key themes and related these to contemporary UK society. Firstly, participants commented on the playfulness of Sophia and her grandmother, as depicted in one chapter where they imagine Venice as being underwater and they ‘rebuild it’ out of stones and other materials they find on the shore.

Readers emphasised the importance of having the time and space to be creative, playful and imaginative regardless of one’s age, but suggested that it was difficult to do this in a work-focused society where so much time was taken up by paid employment. This led to a discussion about the potential benefits of a four-day week, an idea advocated by some as one way to achieve a better work-life balance in a post-Covid society.

Participants also discussed examples of age-based exclusion in the book. For instance, during the summer there is a party on the island, but Sophia and her grandmother are not invited. Instead they are given a box of chocolates and a card:

‘Grandmother put on her glasses and read…”Love and kisses to those too old and too young to come to the party.” “How tactless”” she muttered through her teeth.

“What does it say? What did they write?” Sophia shouted.

“It says,” her grandmother said, “what it says is: ‘We have behaved very badly, and it’s all our fault. Forgive us if you can.’”

This prompted some participants to relate their own experiences of being overlooked for job opportunities, whether because of being perceived as too inexperienced (too young) or, as some participants suspected, of being seen as ‘too old’. While they were aware of laws against age-based discrimination, participants felt that ageism is still a reality in everyday life.

Like all good book group discussions The Summer Book divided opinions, and some participants enjoyed it more than others. We’d love to know what you think, so please do send us your comments via the link below.

View all posts by mlovatt

One thought on “The Summer Book by Tove Jansson”